The true story about a Swedish filmmaker and a banana corporation. Dirty tricks, lawsuits, manipulation, and the price of free speech. 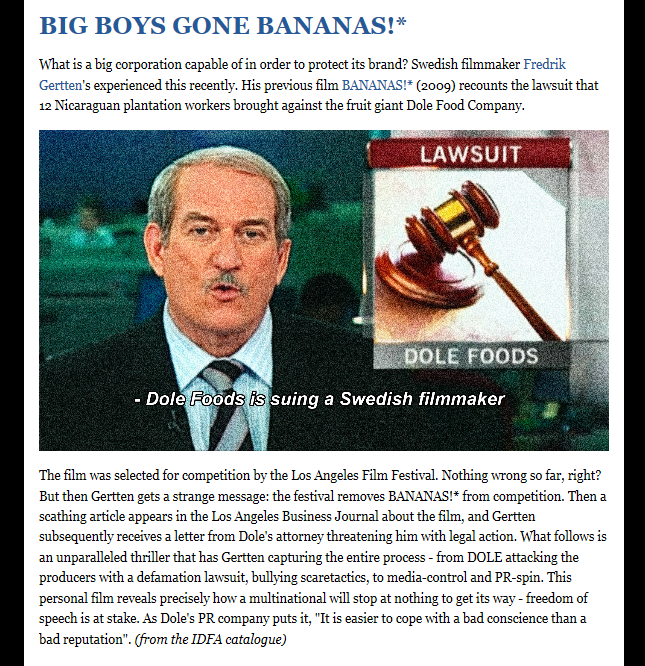 Background on BIG BOYS GONE BANANAS!*
BANANAS!* was one of the most talked-about documentary films of 2009. The interest from media and the support from audiences and fellow filmmakers has been overwhelming. Below is a brief outline of the events during the hectic months before and after the film’s premiere.

(Spoiler alert - You might want to watch the film before reading all this...)

In April 2009, BANANAS!* was selected to compete in the Los Angeles Film Festival to be held in June.

On May 8th, a hearing about the fraud case featured in BANANAS!*, was held in Los Angeles Superior Court. BANANAS!* was the subject of a discussion between Judge Victoria Chaney and Dole attorney Andrea Neuman, and the trailer for the film was showed in the court room. In regard to the film, Judge Chaney stated to those present: “Just so we are clear, I am not in any way going to make, and I will not consider, any request for prior restraint on free speech. Okay?  So, don’t ask me to go try and contact the film company. I don’t have jurisdiction over them. But even if I did, don’t ask me for it.” After the hearing, Dole’s law firm, Gibson, Dunn & Crutcher, sent a letter to WG Film, ITVS and all of the sponsors of the Los Angeles Film Festival. Dole did not like the trailer, nor the promo material featured on the website.


On May 14th Dole’s lawyers sent a second “cease and desist” letter, still trying to shut down a film they had not seen. We responded by offering tickets to the LA premiere on June 20th.

On June 5th, based on threats from Dole of possible legal action against the festival, the Los Angeles Film Festival moved BANANAS!* out of competition. Instead, a “special case study screening” was arranged, with a post-screening discussion with Gertten.

On June 8th, the Los Angeles Business Journal published a story about BANANAS!* entitled ”The Big Slip-Up” with the sub headline “Documentary on lawyer needs fact-check.” The Los Angeles Business Journal, however, clearly did not conduct any fact-checking on its own article, let alone the film, because nobody at the Los Angeles Business Journal had seen the film. Following the article, Gertten stated in a press release: “In answer to the question of whether my film is fraudulent, I cannot see that it is.  Everything I filmed is the truth and how this all played out during this trial.  The most important evidence in the case is a letter between Standard Fruit Company (now Dole) and Dow Chemicals. This is hard evidence and was not something that I made up.”

On June 8th, a news team from Swedish National Television (SVT) interviewed Fredrik Gertten. Shortly after the story was broadcast, the reporter was contacted by Dole’s PR firm, Gibraltar Associates in Washington D.C. Three days later, another interview was made by the same team, now with the focus on the fraud accusations, including a telephone interview with Michael Carter, Dole’s Executive Vice President. The story was broadcast on prime time national SVT news.

June 20th – premiere day. Just hours before the screening, the Film Independent board held an internal screening, and discussed what to do. They decided to proceed, and BANANAS!* was screened at the UCLA James Bridges Theatre. In the last minute, however, BANANAS!* was pulled out from the Audience Award. Festival volunteers even had to re-collect the voting ballets from the sitting audience. Before the screening, the executive director of Film Independent, Dawn Hudson, read a statement addressing why the film was removed from competition.

On July 7th, Dole filed a civil lawsuit in Los Angeles Superior Court against WG Film, director Gertten and producer Margarete Jangård over the LA screenings of BANANAS!*. The lawsuit claims that the film defames Dole.

On October 1, BANANAS!* was screened in a fully booked meeting room in the Swedish parliament. After the screening, MPs Mats Johansson and Luciano Astudillo launched a cross-party petition, collecting names in the Parliament. In the petition they are asking Dole to withdraw their lawsuit. The will to defend free speech was overwhelming from politicians from left to right, and the story got widely spread in Swedish media. Read more...

On October 9, BANANAS!* had its Swedish premiere. Over 20 cinemas all over Sweden screened the film simultaneously. After the screening, Fredrik Gertten was interviewed by Orvar Säfström at Spegeln Cinema in Malmö. The interview was broadcasted live, and audiences all over Sweden could send questions via SMS. Over 400 questions were received. A recording of this Q&A will be included on the BANANAS!* DVD, with planned release in December, 2009.The same morning, reviews were published in all major Swedish newspapers. Dagens Nyheter, Sydsvenskan, Aftonbladet and Expressen all gave it 4 out of 5 stars. Read more...

On October 15, BANANAS!* was once again discussed in the Swedish parliament, this time on government level. The Swedish minister of culture, Lena Adelsohn Liljeroth, met with Fredrik Gertten, free speech lawyer Percy Bratt and MPs Mats Johansson and Luciano Astudillo to get a deeper insight into the matter. The same day, Dole withdrew their lawsuit. In a press release, Dole said they had made their decision in light of the free speech concerns being expressed in Sweden, although they continues to believe in the merits of its case.

On October 29, director Fredrik Gertten, producer Margarete Jangård and WG Film withdrew their counterclaim against Dole. However, they asked the court to compel Dole to pay the fees and costs incurred to defend the lawsuit.

On November 17, the written ruling was finally released. The Los Angeles Superior Court granted the anti-SLAPP motion filed by Fredrik Gertten, Margarete Jangård and WG Film, and struck the defamation complaint filed by Dole. The Court found that a “careful review of the film did not support Dole’s assertions” in the complaint. In addition to striking the lawsuit with prejudice, the Court ordered Dole to pay attorneys fees and costs in the amount of $200,000.